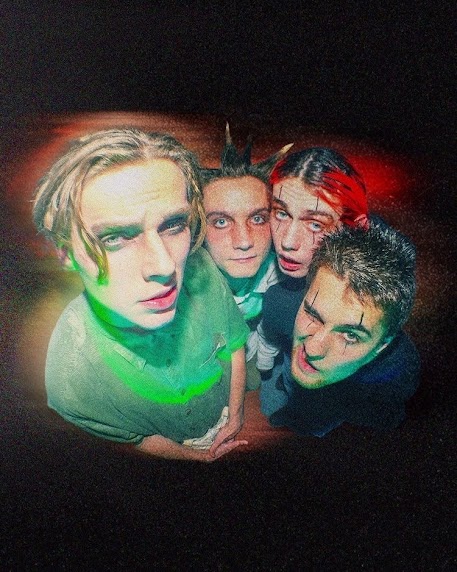 Storming out of Truro College in summer 2020, FacePaint are the newest bunch of high octane indie-punks to emerge from the ever exciting college music scene in Cornwall. The band have focused on musical evolution since their formation in March, 2019. Their music has been described as a mix of “Psychedelic”, “Slacker Rock”, “Indie” and “Prog-Punk” by local press and fans in the Cornish music scene.

FP stormed straight out of the gate with their self-titled and self-produced EP in early 2019. Shortly after, with the addition of guitarist and now lead vocalist Arthur Pendry, FacePaint dropped their ‘Do It Yourself’ EP which saw the group really take their creative vision into their own hands by shooting and directing their first music videos.

The addition of the fourth member brought needed change to the table and the band went on to release 3 track EP ‘BOMB’ and then standalone single ‘In My Hands’. The band has seen major evolution with their sound and songwriting style and are currently working on their follow up effort with producers Ross Ruthero and Matt Conybear at CUBE studios, Cornwall.

The Truro slacker punks already boast a whopping 50k+ streams on Spotify, having made themselves known on the South-West live circuit. With a penchant for anarchic, high energy live shows that are consistently chaotic, intense and brimming with the spirit of the 80s punk scene – the four piece have already performed alongside Mother Vulture, The Rezner, Skinny Milk, School Disco and more, at several sold out shows across the county.

Facepaint have plans to tour the UK with fellow Cornish indie-punk Flowers Of Palo in August 2021. The band are confirmed for Boardmasters and The Great Estate Festival.